At tea Bangladesh were 424 for eight needing 57 further runs to make New Zealand bat again. Mahmudullah was not out 141 with Khaled Ahmed on four, while Boult had five for 119. Soumya’s defiant innings ended at 149, bowled by Trent Boult after taking the new ball during the middle session. (READ: 1st Test, Scorecard)

It was a maiden century for the 26-year-old left-hander, who shared in a 235-run stand with his captain Mahmudullah for the fifth wicket. They were together for more than 54 overs as they took Bangladesh from 126 for four to 361 for five in the sixth best partnership by a Bangladesh pair.

When Soumya was bowled he stood motionless at the wicket for several seconds as realised the significance of separating the last recognised Bangladesh batsmen. Four wickets fell in 11 overs as Boult also bowled Liton Das and Abu Jayed to go with the wickets of Mominul Haque and Mohammad Mithun he took the previous day.

Neil Wagner joined in with the dismissal of Mehidy Hasan for one. Soumya had batted at a rollicking pace with his 149 coming off 171 deliveries and included 21 fours and five sixes. Mahmudullah, meanwhile played a more cautious knock having gone to the middle with Bangladesh 126 for four. 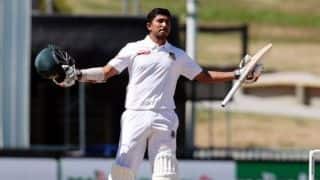 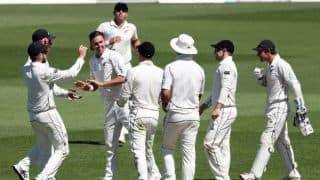