A five-wicket haul to Wagner ripped through Bangladesh to dismiss them for 234.

Neil Wagner finished with a five-wicket haul as New Zealand ripped through the Bangladesh tail to counter Tamim Iqbal’s virtuoso century on day one of the first Test in Hamilton on Thursday.

Despite Tamim’s heroic 126, New Zealand claimed the first-day honours when they reached stumps at 86 without loss in reply to Bangladesh’s 234.

Tamim, Bangladesh’s most prolific scorer, laid the foundations for a potentially huge total when he laid into the bowling after being sent in to bat on a typically green-tinged New Zealand wicket. (FULL SCORECARD: NEW ZEALAND vs BANGLADESH)

He cracked 21 fours and a six as he feasted on fruitless New Zealand efforts, led by strike bowlers Tim Southee and Trent Boult, to find the edge of his bat.

But there was minimal support, and after Tamim had steered Bangladesh to 180/4, his dismissal triggered a collapse where the last six wickets fell for 54 runs. Liton Das, the last man out, had the second highest score of 29. (READ: Tamim Iqbal falls for 126 as New Zealand strike back)

New Zealand had an anxious moment at the start of their reply when Ebadat Hossain, on debut, saw his third ball in Test cricket fly from Tom Latham’s bat direct to second slip, but Soumya Sarkar spilled the straightforward chance. From there Latham and Jeet Raval knuckled down to bat unruffled through to stumps with Raval on 51, his eighth half-century, and Latham on 35.

In a productive morning session, Bangladesh went to lunch at 122/2 with Tamim contributing 86, including 15 fours, as he showed that despite the green hue the wicket held no dangers. Wagner in that period took 1/13 off six overs, while Southee had none for 40 off six.

One session later and Bangladesh went to tea at 187/7 with Wagner’s figures improving to 3/29 while Southee was still being caned at 1/71. The pair cleaned up the last three wickets immediately after tea with Wagner taking 5/47 with his relentless short-ball barrage, while Southee 3/76.

Colin de Grandhomme only took one wicket but it was the key dismissal of Tamim who clipped a wide delivery to Kane Williamson at gully. It made up for de Grandhomme’s earlier error when he dropped a regulation caught and bowled opportunity from Tamim on 65. 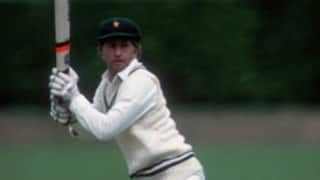