At stumps on day four at Basin Reserve, Bangladesh were 80/3, still 141 behind New Zealand.

A double ton from Ross Taylor and three quick Bangladesh wickets put New Zealand in a prime position to pull off an exceptional victory in the rain-shortened second Test in Wellington on Monday.

At stumps on day four at Basin Reserve, where the first two days were washed out, Bangladesh were 80/3, still 141 from making New Zealand bat again.

Taylor, dropped twice on 20, proceeded to punish the Bangladesh attack with a rollicking 200 from 212 balls before New Zealand declared at 432/6.

With 23 overs left in the day, Bangladesh had a disastrous start to their second innings when Tamim Iqbal was bowled in the first over. After innings of 126 and 74 twice so far in the series, Bangladesh’s leading run-scorer was out for 4. (FULL SCORECARD: NEW ZEALAND vs BANGLADESH)

Mominul Haque followed for 10 and Shadman Islam for 29 leaving Mohammad Mithun on 25 with Soumya Sarkar not out 12.

New Zealand resumed the day at 38/2 and piled on 394 runs in 73 overs before sending Bangladesh back in.

Taylor, after surviving the two early chances, made Bangladesh pay a high price for their fielding errors. He clouted Taijul Islam for six over the long-on boundary to bring up his century which took him past his mentor, the late Martin Crowe, to become New Zealand’s second most prolific century-maker with 18, two behind Kane Williamson.

He put on 172 with Williamson for the third wicket and then 216 with Henry Nicholls for the fourth in an innings which included 19 fours and four sixes.

But after reaching 200 for the third time in his career, and raising his bat in salute, he was dismissed from the next ball he faced, caught behind off Mustafizur.

Williamson, who batted with a painful shoulder injury, made it through to 74 before he was dismissed and taken for a scan which proved inconclusive. He stayed off the field when Bangladesh started their second innings and will have a second scan on Tuesday morning.

Nicholls swept Taijul Islam to the boundary to bring up his fifth century in the second over after tea, but only faced another seven deliveries before Taijul bowled him for 107.

Mahmudullah had varied his attack as best he could but for most of the day Taylor, Nicholls and Williamson had an answer for every move. Apart from the two dropped catches off Abu Jayed in the third over, the raw Bangladesh seamers, with only 17 Tests between, them were unable to make full use of the green strip.

When they failed to make inroads, spinners Taijul and Mominul Haque were called on to stem the run flow. Although Taijul removed Williamson and Nicholls, his two wickets cost 99 runs. 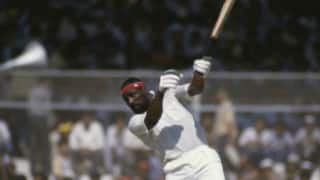