Jeet Raval completed his maiden Test century as New Zealand closed in on Bangladesh’s first innings 234 with all wickets intact on day two of the first Test in Hamilton on Friday.

At lunch, New Zealand were 197 without loss with Raval on 109 and Tom Latham on 83. (FULL SCORECARD: NEW ZEALAND vs BANGLADESH)

While Latham posted his first century in his fifth Test, and is nearing his ninth, it has been a long journey for Raval to reach three figures. He is now into his 17th Test and until he pulled Ebadat Hossain to the boundary to move from 97 to 101, he held the New Zealand record for the most fifties (eight) without reaching a hundred.

With the same scoring shot, he also passed 1,000 Test runs. (READ: We should have scored a lot more runs: Tamim Iqbal)

After resuming the day at 86 without loss, Raval and Latham added 111 in the morning session.

With the wicket favouring the batsmen, Liton Das was a lone figure behind the stumps for Bangladesh as the field spread ground in an attempt to stem the run flow.

Raval, whose previous best score was 88 against South Africa on the same ground two years ago, moved into the nineties for the first time, pulling Khaled Ahmed to the midwicket boundary. He faced 10 dot balls before advancing with a single and then cracking successive Ebadat deliveries to the square leg boundary to reach the milestone.

The only appeal in the morning session came just before lunch with the introduction of spin. Mehidy Hasan went up when the ball hit Raval on the front pad, but the ball was outside the line of the off stump. 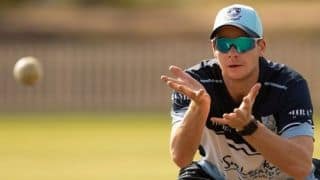