Tom Latham became the sixth New Zealand opener to reach 200 in a Test match, converting his overnight 121 into a career-best 215 not out to take the hosts to 509/6 by tea against Sri Lanka at the Basin Reserve on Monday.

With a flick off the stumps for two not long after play resumed after lunch, Latham moved past his previous Test best of 177. Having lost Ross Taylor without a run added to his overnight 50 courtesy a stunning catch from Dimuth Karunaratne at short leg who intercepted a whip off the pads exceptionally, Latham put on 114 for the fourth wicket with Henry Nicholls (50) and then 73 in 15 overs with Colin de Grandhomme (49).

By tea in Wellington, New Zealand’s lead swelled to 227. With rain forecast for day five, a declaration may not be too far away post tea.

Nicholls continued his resolute batting from the UAE and helped Latham steer New Zealand through the morning session after Karunaratne’s stunner. Nicholls’ driving down the ground was particularly pleasing, and it was one such attempted drive off Dilruwan Perera that saw him pick out long-on for 50. BJ Watling was greeted with a nasty bouncer from Lahiru Kumara that kissed his bat through to Niroshan Dickwella as he attempted to tuck it away, and his exit for 0 meant Sri Lanka had prized out two wickets without a run conceded.

Enter de Grandhomme, who swung three fours and three sixes in his 53-ball 49 in a busy stand with Latham. He edged his first ball wide of the slips for four and hardly looked back until he swung Dhananjaya de Silva straight to deep midwicket to miss a fifty by one runs. 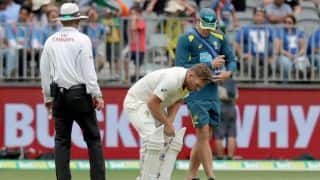