Latham and Nicholls have since put on 80 for the fourth wicket.

Opener Tom Latham produced his eighth Test century as New Zealand continued to forge a huge lead over Sri Lanka in the second Test in Christchurch on Friday.

At lunch on day three, New Zealand were 327/3 giving them a 401-run lead on the second innings. Latham was 118 with Henry Nicholls on 35. Left-hander Latham – whose unbeaten 264 in the drawn first Test is the top score in Test cricket this year – reached his latest milestone with a boundary off Suranga Lakmal late in the morning session.

He added 44 in the session to his overnight 74, with one nervous moment when he was rapped on the pads after the new ball was taken on the second over of the day. Latham did not play a shot at the Lakmal delivery which nipped back at him but despite a vociferous appeal from the Sri Lankans the umpire’s not out decision stood.

Latham moved into the nineties with a fortuitous five off Dushmantha Chameera when a single to fine leg was followed by four overthrows with no one backing up at the bowler’s end. His patient century came off 267 deliveries and included 10 fours.

The only reward for Sri Lanka on a blustery third morning came when Lahiru Kumara trapped Ross Taylor in front to claim the senior batsman’s wicket for 40. Latham and Nicholls have since put on 80 for the fourth wicket. 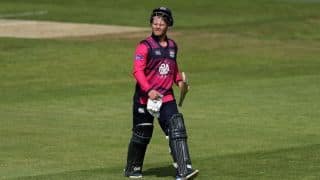 Troubled past behind Ben Duckett as he targets England recall 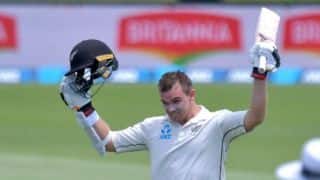