Suranga Lakmal was the pick of the Sri Lankan bowlers with 5/52 on day one at Hagley Oval.

Tim Southee led a rollicking New Zealand fightback Wednesday but a five-wicket strike by Suranga Lakmal ensured Sri Lanka held the honours at tea on day one of the deciding second Test on Wednesday.

Southee was dismissed shortly before the interval for 68, after a 108-run stand for the seventh wicket with BJ Watling. Lakmal quickly removed his replacement Neil Wagner as New Zealand ended the second session at 175/8. Watling, so often called upon by his country to repair a mangled innings, was unbeaten on 46.(ALSO READ: LIVE SCORECARD: NZ vs SL, 2nd TEST)

Southee joined Watling with New Zealand in serious trouble at 64/6 after Sri Lanka won the toss and elected to bowl on a green wicket with a heavy cloud cover. Lakmal decimated the top order with a burst of four for 11 during the opening session while Lahiru Kumara engineered two further wickets soon after lunch.

But when the scoreboard suggested New Zealand needed patience and caution, Southee preferred to fight his way out of trouble. His shot selection may not always have been textbook but it was good enough for him to land three sixes and six fours in his 65-ball innings. (ALSO READ: Dilruwan Perera fourth Sri Lankan to 150 Test wickets)

Lakmal, so used to playing second fiddle to spinners in the sub-continent, relished New Zealand’s seam-friendly conditions as he opened the series-deciding Test moving the ball both into and away from the batsmen. The dismissals highlighted his repertoire with catches by the keeper, second slip and mid-off as well as a bowled as he sent Jeet Raval (six), Tom Latham (10), Kane Williamson (two) and Henry Nicholls (one) back to the pavilion.

Kumara joined the wicket spree after lunch as New Zealand’s fortunes continued to disintegrate. His attempt to stop a straight drive from Watling saw the ball crash through his fingers and onto the stumps leaving Ross Taylor, on 27, stranded out of his crease.

Big-hitting Colin de Grandhomme could not contain himself when Kumara offered a short ball wide of the off stump — an attempted hook over the leg-side boundary only found Dushmantha Chameera at midwicket.

Southee also chose not to abandon his natural carefree batting, but with better success than de Grandhomme, taking 14 off one Lakmal over with two fours and a six. Another six off Chameera saw a leaping Roshen Silva get a hand to the ball but both ball and fielder ended up over the rope.

The 31-year-old Lakmal was the pick of the Sri Lankan bowlers with 5/52. 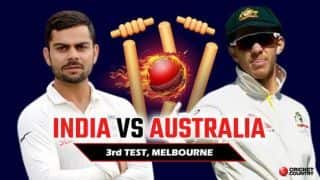