In a thriller that went down to the final delivery, off which India needed four to win, the White Ferns held their nerves, with Leigh Kasperek conceding just a single.

Sophie Devine starred with both bat and ball as New Zealand women completed a 3-0 sweep over India by winning the third and final T20I by two runs. In a thriller that went down to the final delivery, off which India needed four to win, the White Ferns held their nerves, with Leigh Kasperek conceding just a single.

The narrative for India s chase was familiar. Smriti Mandhana once again looked unstoppable while she lasted. The opener struck her eighth T20I half-century, second of the series and provided India a brisk start to a chase. Needing 162 to overhaul New Zealand s target, Mandhana began India s chase with a boundary of Leu Tahutu in the first over and took Anna Peterson for a six and a boundary in the next.

Mandhana was severe on Kasperek, taking her on in the very first over. Despite the wicket of Priya Punia, Mandhana was able to score three boundaries to keep India marching as per the required run rate. New Zealand s score at the Powerplay read 52/1, and India went one up to reach 56 after the first six overs with Mandhana in terrific touch.

Amelia Kerr and Devine put the brakes on the scoring bowling three tidy overs. The pressure of dot balls prompted Jemimah Rodrigues to lose her wicket for 21. But that had no effect on Mandhana, who took Rosemary Mair for three boundaries in the 10th over to bring India close to a 100. However, once India were past it, two wickets fell in quick succession with Kerr and Devine removing skipper Harmanpreet Kaur and Mandhana, which punctured India s chase.

This wasn’t Devine’s first impact in the match. Her 72 off 52 formed the fulcrum of New Zealand s total, even though at one point, they seemed to be on course to a total much bigger. From 140/3, India women pulled things back and conceded just 21 runs in the final 3.2 overs.

Devine and Suzie Bates were off to a brisk start bringing up the 50-run stand for the opening wicket inside the Powerplay. Bates looked solid during her 18-ball 24, including five boundaries before Arundhati Reddy removed her. Hannah Rowe hung around to score 12 off nine and was out LBW to Poonam Yadav. The wait for India s next wicket was a long one eight overs, in which Devine and captain Amy Sattherwaite deflated the attack with a 71-run partnership

Sattherwaite scored 31 off 23 with three fours but it was Devine who stole the show with her batting. After a quiet first over, Devine began the assault with three boundaries off Manasi Joshi in the second, in which Punia put the opener down at covers. With a six and a four off Poonam, Devine brought up her 10th T20I fifty, second of the series, off 39 balls. But India women came back strongly once she was dismissed bowled by Joshi to pick up five wickets in the final 20 balls to keep New Zealand down to 161. 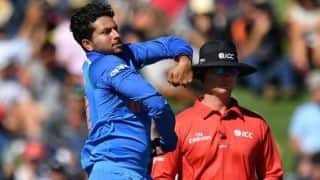 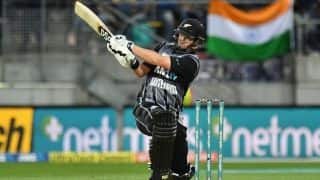