O Brien and George Dockrell added 63 unbeaten runs for the seventh wicket to take Ireland to 220 for 6 at tea.

Kevin O Brien registered his second fifty-plus score in Tests to put Ireland in the lead against Afghanistan in their one-off Test at the Rajiv Gandhi Stadium in Dehradun. O Brien and George Dockrell added 63 unbeaten runs for the seventh wicket to take Ireland to 220 for 6 at tea, ahead of Afghanistan by 78 runs.

After Andrew Balbirnie and James McCollum had added 102 runs in the morning session to lead a spirited fightback, Afghanistan wristspinners Rashid Khan and Waqar Salamkheil struck shortly after lunch to remove both set batsmen in quick succession. 14 short of his maiden century, Balbirnie edged the chinaman bowler to Ikram Ali Khil at first slip, followed by the wicket of McCollum in the very next over out LBW to Rashid.

The spin duo stuck again to remove wicketkeeper batsmen Stuart Poynter and Stuart Thompson as Ireland, from the comforts of 137 for 2 slumped to 157 for 6, before O Brien and Dockrell began the repair work. Both batsmen began steadily, and once the going became easy, O Brien scored at a brisk rate creaming six boundaries, the last of which brought up his half-century. Dockrell resisted the spinners and batted with patience to reach 25 off 76 with two boundaries.

Ireland would be content with the way O’Brien and Dockrell batted, taking a lead out of Balbirnie and debutant McCollum, who on St. Patrick’s Day, blunted the new-ball and forged a century-plus stand for the third wicket.

Resuming Day 3 at 22 for 1 and behind by 120, Ireland were dealt an early jolt, in the form of Paul Stirling s wicket, given out LBW to Yamin Ahmadzai despite a thick inside edge onto pad. But from there onward, Balbirnie and McCollum took over and brought Ireland back into the match. The fact that 102 runs were scored in 34 overs speaks volumes of how positively both batsmen batted.

Balbirnie reaching his first Test fifty with a cut shot for a boundary behind square. He was the aggressor of the two in the partnership striking eight fours in the first session and putting away the freebies Afghanistan had to offer, which were quite a few. Balbirnie was severe on chinaman bowler Waqar Salamkheil, who bowled way too short to him. McCollum however, at time seemed stuck and overwhelmed by Rashid s variations but successfully held his ground despite a few nervous moments outside off.

McCollum took four balls to get off the mark with a crisply-timed flick towards midwicket but had to wait for another 10 overs before getting his second, running Rashid past slip. The introduction of Mohammad Nabi made life easier for McCullum, taking the offspinner for back-to-back boundaries as runs started to flow. A couple of loud caught behind appeals, and a light edge that fell just short of first slip did not break McCollum s concentration even as he went another 10 overs without a boundary. 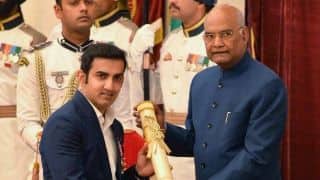 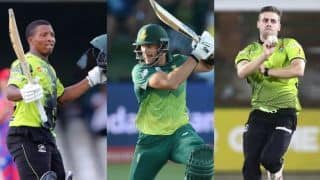