Afghanistan bowlers had their say on the opening day of the one-off Test against Ireland at the Rajiv Gandhi International Stadium, Dehradun, bowling out Ireland for 172, before the batsmen ended the day at a healthy 90/2 on Friday.

Murtagh, who remained unbeaten at 54, and George Dockrell, who made 39, put together an 87-run 10th-wicket stand to give Ireland a respectable outcome after they were left reeling at 85-9.

Opener Paul Stirling gave the team a brisk start with his 26 but Ireland’s batting collapsed to 69-7 at lunch.

Nabi combined with wrist spinners Rashid Khan and Waqar Salamkheil — who took two wickets each — to run through Ireland’s top and middle order.

But Murtagh, a right-arm fast bowler who bats left-handed, registered his 11th first-class fifty to get a standing ovation from the Afghanistan dressing room.

In reply, Afghanistan opener Mohammad Shahzad made a quick-fire 40 off 64 balls. Afghanistan lost opener Ihsanullah for seven to spinner James Cameron-Dow in the 13th over but Shehzad and Rahmat Shah took Afghanistan past the 50-run mark. Cameron-Dow had his second victim of the day when Shahzad hit one straight back at the bowler.

Shah (22*) and experienced Hashmatullah Shahidi (13*) then saw off the day without any trouble.

Both sides are playing their second Test after making their five-day debut last year. 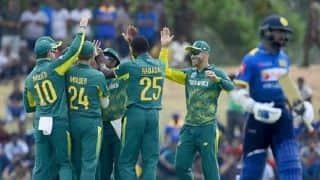