Australia ended the day on 20/2 after Nathan Lyon and Marnus Labuschagne helped bowl out Pakistan for 282.

The debutant Fakhar Zaman and captain Sarfraz Ahmed both fell six runs short of centuries as Marnus Labuschagne s legspin proved a thorn in Pakistan s attempts at a big total day one of the second Test in Abu Dhabi.

The pair had added 147 for the sixth wicket to help Pakistan overcome a dramatic pre-lunch collapse at the hands of Nathan Lyon, but both were cut off by Labuschagne who finished with his Test-best figures of 3/45on a surface already showing signs of sharp turn. Pakistan were bowled out for 282 late in the day, a remarkable recovery from 57/5 , and Mohammad Abbas getting Usman Khawaja and Peter Siddle before stumps – he is now joint second-fastest to 50 Test wickets – turned a middling day into a good one.

If Lyon dominated the morning session on Tuesday with four wickets in six balls, Labuschagne – in his second Test – played a big role in curbing Pakistan s enthusiasm with the wickets of Zaman and Sarfraz as well as that of Bilal Asif.

Sarfraz had walked to the crease at the fall of Babar Azam for zero with Pakistan having slipped from 57/1 to 57/5 in the morning session, and batted led the counter-punch with three fours in one Siddle over. Sarfraz s busy innings saw him play the spinners well, at times using his feet to smother the turn and drive boundaries over mid-on and over midwicket. Remarkably, according to stats analysts CricViz, Sarfraz’s innings is the longest in Tests this year without a single delivery left alone.

Zaman, dropped on 30 just moments before Lyon took two wickets in two balls to put Pakistan in a spin, then overcame a run-out chance before lunch to battle his way to 94 before he fell to Labuschagne. Mitchell Starc was driven and cut with power, Lyon placed delicately off the back foot and Jon Holland easily manoeuvred into the gaps as the star with Sarfraz grew at a good clip. Zaman moved into the nineties wth a huge six off Holland and then on 94, off Labuschagne’s legspin, survived a very good lbw shout when replays showed the thinnest of inside edges. However, the bowler had his man three balls later when sharp turn trapped him in front., and this time the review did not save Zaman.

On 90, Sarfraz was struck on the left elbow and required treatment. Moments later he charged out at Labuschagne and was caught at cover for 94 off 129 balls. Yasir Shah hung around toads 28 off 24 balls, hitting Labuschagne for six and four before he became Mitchell Marsh s 34th Test wicket. The last wicket came with the new ball as Starc yorked Abbas for 10.

That Pakistan even got to 150 after Lyon s four-wicket burst in the morning is remarkable. The 30-year-old offspinner, who now sits at fourth place in Australia s all-time Test bowling list, began with the wicket of Azhar Ali for 15, missed a hat-trick after getting Haris Sohail first ball and then added Asad Shafiq and Azam for ducks. In the over after Labuschagne dropped at midwicket off Holland s left-arm spin, Lyon held a return catch off Azhar (15) and then had Sohail edging to silly point where Travis Head took a superb reflex catch to leave Lyon on a hat-trick.

It was not be, but in his fifth over Lyon had Shafiq inside-edging to short leg where Labuschagne held on and then Azam bowled as he looked to drive his second ball inside-out. Zaman was nearly run out in Lyon s next over, saved as he somehow managed to ground his bat after diving into the crease. 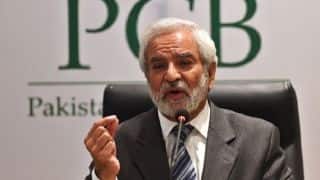