Azhar Ali was on 24 and Haris Sohail was 14 from 67 balls at lunch on day one in Dubai.

Colin de Grandhomme removed the Pakistan openers in a telling new-ball spell on the opening morning of the second Test in Dubai before the home team steadied themselves to 56/2 by lunch.

The New Zealand allrounder looked on in disappointment as Tom Latham spilled Imam-ul-Haq on 9 at second slip, but it was not long before he had his name in the wickets’ column. On 9, Mohammad Hafez was squared up and edged to Latham in the slips where a low catch was held. Pakistan were 18/1.

Latham made amends for his drop of Imam when he held a thick edge off the batsman, giving de Grandhomme his second in a spell of 8-3-14-2.

From 25/2 Pakistan progressed without further loss into the lunch interval. Azhar Ali was on 24 and a dour Haris Sohail was 14 from 67 balls. Sohail had several testing moments against Trent Boult, whom he twice edged safely and chipped just short of midwicket apart from one leading edge that landed in no man’s land. 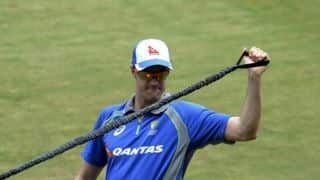