This win is New Zealand s narrowest in terms of runs, beating their seven-run success over Australia in 2011.

In their first Test match in over seven months, New Zealand have edged the first Test against Pakistan in Abu Dhabi by four runs in scarcely believable scenes on Friday. This win is New Zealand s narrowest in terms of runs, beating their seven-run success over Australia in 2011.

The debutant left-arm spinner Ajaz Patel was at the forefront of this sensational victory, snapping an opening stand of 40 as Pakistan lost three wickets in eight balls during the morning session and post lunch taking 5/59 as the home team collapsed from lost seven wickets for 41 runs.

With telling blows from Ish Sodhi and Neil Wagner, as well as the obligatory madcap Pakistan run-out adding to the mix, New Zealand defended a target of 176 tooth and nail to head to Dubai with 1-0 lead. This is their second win in four Tests in the UAE, with one draw.

Spare a thought for former Pakistan captain Azhar Ali, who came to the crease at the fall of the first wicket and was last out for 65, lbw to Patel who won the match with his fifth wicket. Azhar put on seven runs in 46 balls with the last man Mohammad Abbas until he was at the wrong end of an unsuccessful review for lbw.

Pakistan resumed on 37 without loss and lost Imam-ul-Haq for 27 in the fifth over on Monday, trapped lbw by left-arm spinner Patel when playing off the back foot to a sharply turning delivery. Three balls later, Mohammad Hafeez (10) followed his opening partner when he tamely chipped a flighted ball from Sodhi to short cover.

Haris Sohail advanced to his second ball and thumped Sodhi over mid-on for four, and off the next delivery stepped forward and bunted a low full toss back to the bowler who held a smart catch to his left. From 40 without loss, Pakistan had fallen to 48/3.

The new pair of Azhar and Shafiq smartly negotiated the turn and accuracy of Sodhi and Patel, watchfully playing out the former and then attacking the debutant. Shafiq started to use his feet to Patel, nicely timing a flick over midwicket and lofting easily over mid-on for fours, while Azhar brought out the reverse-sweep and the aerial sweep for fours in one Patel over.

Wagner was belatedly introduced for the first time after 33 overs and, roared his delight when Shafiq edged a drive to BJ Watling in his third over.

With 29 runs needed, Babar Azam became the fifth Pakistan batsman dismissed when he hesitated after working the ball past square leg and looked to see Azhar sprinting down. It was a proper Pakistan run-out. Not long after, Safraz mistimed a hearty sweep at Patel. New Zealand did not hesitate to review, and had their sixth wicket.

A haphazard swat across the line to Patel saw Bilal Asif next to go for 0, and the tension was ratchet up when Yasir Shah was given out caught behind first ball but successfully reviewed the decision. He did not last long, however, as Wagner had him steering an edge to Ross Taylor at fly slip for 0.

Azhar stood firm to smash Wagner straight past the stumps for four to reduce the asking to 16 runs, but then hung his head when Hasan Ali slogged Patel to long-on for the third duck in a row. Abbas did well to play out 10 balls without scoring, but it was Azhar who eventually fell to Patel who capped a dream debut. NZ A vs Ind A 1st unofficial Test: Murali Vijay, Ajinkya Rahane among runs as match ends in a draw 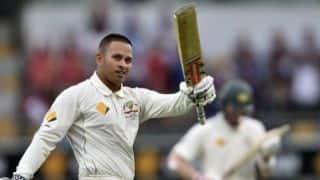 Usman Khawaja expected to be fit for first Test against India