In their first Test in seven months, New Zealand face a trial by spin after losing two wickets to Yasir Shah on the opening morning of the first Test with Pakistan in Abu Dhabi. A customary wicket to the sensational Mohammad Abbas set the tone for Pakistan’s dominance after Kane Williamson chose to bat, and two quick wickets to Yasir forced the tourists into a shell.

A watchful opening stand of 20 was broken in the 11th over when Abbas had Jeet Raval (7) nibbling an edge to Sarfraz Ahmed, the reward for maintaining a probing line to the left-hand opener. Hasan Ali was fruitless but very accurate in a second spell of 5-4-1-0 that added to the pressure on the New Zealand batsmen, while Yasir made inroads.

The legspinner delivered a wicket in his first over as Tom Latham (13) tamely pushed a catch to Mohammad Hafeez at short midwicket, and his second came when Ross Taylor (2) was lured into a prod at a juicy legbreak that drew the edge for Sarfraz to take his second catch.

Williamson had little option but to shore up one end watchfully as Yasir found a bit of turn and Hasan probed away. His on-side play was particularly pleasing, as evident by a couple wristy whips for four off Yasir. Nicholls displayed a good technique against spin, even daring to venture out to Yasir and hit him between midwicket and mid-on for four. 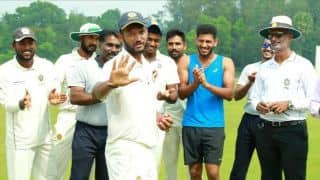