From 50/1 to 90 all out, New Zealand gave way in alarming manner on day three in Dubai.

One of the most dramatic collapses of all time has seen New Zealand lose 10 wickets for 40 runs in 13.5 overs, with the legspin of Yasir Shah proving their undoing in scarcely believable manner on day three of second Test in Dubai.

Getting big purchase off the pitch and mixing flippers with sharply fizzing leg breaks, Yasir snapped New Zealand s resistance from 50 for no loss in the 2nd over to finish with a career-best 8/41 of which 6/32 came in one spell. Six batsmen failed to score as Yasir, with a bit of help from Hasan Ali, triggered a collapse that left New Zealand 90 all out, 355 runs adrift of Pakistan s 418/5, with their captain Kane Williamson 28 not out off 37 balls.

The follow-on was promptly enforced, and Yasir then removed Jeet Raval for the second time in the day, courtesy a smart stumping by Sarfraz Ahmed. By tea on Monday the tourists were 39/1.

Yasir s 8/41 are the best figures by a Pakistan spinner against New Zealand in Tests, surpassing the 7/52 that Intikhab Alam claimed in 1973. Overall, against all teams, they are the second best after Abdul Qadir s 9/56 versus England in 1987.

Earlier, morning rain delayed the start of play by an hour, after which Raval and Latham continued their watchful approach by seeing out Hasan (5-4-4-0) and Mohammad Abbas (5-2-9-0) in a period in which the first six overs were maidens. Raval was dropped on 17 by Asad Shafiq at second slip off Hasan, and progressed to 31 before a 50-run opening stand was broken by Yasir when the batsmen reverse-swept and watched as the ball deflected off his bat onto the stumps.

The breakthrough was had at 50/1, from where Yasir proceeded to stun New Zealand with a triple-wicket maiden over as the well-set Tom Latham was undone by Yasir s bounce and Ross Taylor and Henry Nicholls were flummoxed by deliciously crafty flight and turn. The first to go was Lathham, whose attempt to sweep was gobbled up at short leg before Taylor was bowled by a sharply turning delivery that hit off stump and Nichols stunned by another that pitched and ripped past his outside edge. This triggered a stumble from 50 for no loss to 61/4.

What happened after lunch was no less alarming. In the first on resumption, BJ Watling run out when he pushed the ball back past the stumps and a misfield at mid-on from Hasan was followed by a throw back to Yasir. Back into the attack came Hasan, the master of the late-innings in-cutters, and out went Colin de Grandhomme for zero when was trapped flush in front by a sharply moving delivery.

Ish Sodhi and Neal Wagner had no idea to Yasir s variety and departed in the same over, and then Ajaz Patel and Trent Boult also went in an over to complete the rout. A few good shots to Williamson gave him an unbeaten 28, the third New Zealand batsman to get double-figures.

In the ninth over the second innings, Sarfraz whipped off the bails after Yasir brought Raval foreword and spun the ball past the bat. 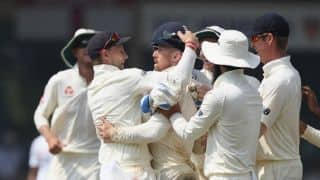 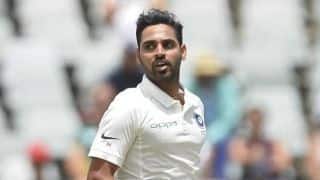