From 50/0, New Zealand crashed to 61/4 as Yasir Shah struck four times in 19 deliveries on day three.

A slow-moving abridged third morning on account of rain in Dubai was sparked to life by the legspin of Yasir Shah who grabbed four wickets in the span of 19 deliveries to send New Zealand into lunch on 63/4, still a massive 355 runs adrift of Pakistan s 418/5 declared in the second Test.

Three of them came in one devastating maiden over as the well-set Tom Latham was undone by Yasir s bounce and Ross Taylor and Henry Nicholls were flummoxed by deliciously crafty flight and turn. This triggered a collapse from 50 for no loss to 61/4.

Early morning rain delayed the start of play by an hour, after which Jeet Raval and Latham continued their watchful approach by seeing out Hasan Ali (5-4-4-0) and Mohammad Abbas (5-2-9-0) in a period in which the first six overs were maidens. Raval was dropped on 17 by Asad Shafiq at second slip off Hasan, and progressed to 31 before a 50-run opening stand was broken by Yasir when the batsmen reverse-swept and watched as the ball deflected off his bat onto the stumps.

Then came a triple-wicket maiden over in which Latham s attempt to sweep was gobbled up at short leg before Taylor was bowled by a sharply turning delivery that hit off stump and Nichols stunned by another that pitched and ripped past his outside edge.

New Zealand captain Kane Williamson was with BJ Watling when lunch was taken. 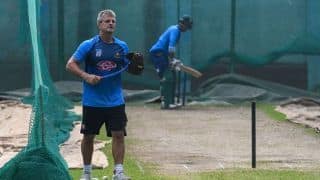