The Victorians were in charge from day one at the Junction Oval in Melbourne when opener Harris slammed 141 to steer them to 289 all out.

In reply, NSW could only manage 121, with seamer Siddle bolstering his chances of making Australia’s Ashes squad by claiming five for 28.

Victoria, who have won four of last five Shield crowns, made 219 in their second innings with Test aspirant Will Pucovski top-scoring with 51, before NSW were toppled for 210 in the run chase. Pattinson (4/41) and Scott Boland (3/30) shared seven wickets between them

Another player looking to be on the plane to England for the Ashes, fast bowler James Pattinson, did the damage with four for 41.

“We had the majority of the dominance through the game and we knew we could be better for longer,” said Victoria skipper Travis Dean.

“We’re a strong group, most of us have been together for four years, It’s something we wanted to do desperately at the start of the year.”

Victorian great Shane Warne was one of the first to offer congratulations.

“Congrats to the mighty Vics on beating our own enemy NSW .. just awesome — proud Victorian right now,” he tweeted.

Harris finished as the 2018/19 domestic competition’s leading run scorer with 1,188. Only 10 men have ever scored more in a season, with Simon Katich topping the list on 1,506. 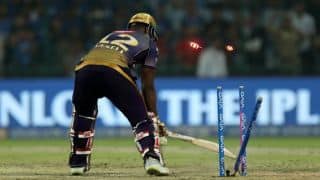