Qalandars defended a total of 138 with fast bowlers Haris Rauf and Rahat Ali sharing seven wickets between themselves.

Lahore Qalandars bagged their first win of the PSL 2019, defeating Karachi Kings by 22 runs on Saturday in Dubai. In a rain-effected game, Qalandars defended a total of 138 with fast bowlers Haris Rauf and Rahat Ali sharing seven wickets between themselves and running through the Kings’ lower order.

After being put in to bat, Qalandars began positively with openers Fakhar Zaman and Sohail Akhtar added 64 runs for the opening wicket before the stand was broken by Umer Khan. Having struck 39 off 25 balls including three boundaries and two sixes, Sohail departed giving a catch to Babar Azam. From there onward, Qalandars struggled for partnerships even as Anton Devcich tried holding one end.

The big wicket of AB de Villiers was snared by Umer, while experienced campaigners Mohammad Hafeez and Brendan Taylor were run out in a space of four overs and 23 runs. Devcich was 28 off 30 before becoming the last wicket to fall as Qalandars finished with a rather modest 138 for 6 on the board.

In reply, Kings were dealt a blow as early as in the second over with Shaheen Afridi cleaning up Liam Livingstone after the opener had scored 11 off 9. Babar and Mohammad Rizwan attempted at steadying the ship with a 49-run partnership for the second wicket. Babar and Rizwan combined to score three boundaries and a six and looked set to put the innings back on track before Hardus Viljoenn struck with the big wicket of the opener.

Colin Ingram endured a low score with Afridi picking up his second wicket. At 90 for 3, Kings needed a partnership and still had control of the match before the Rahat-Rauf show took over. Skipper Imad Wasim s 17 was the only significant contribution from Kings’ middle and lower order, as their last five batsmen combined to score just six runs. In the last five overs, Haris and Rauf knocked the stuffing out of Kings, who lost their last seven wickets for 23 runs and were bowled out for 116. 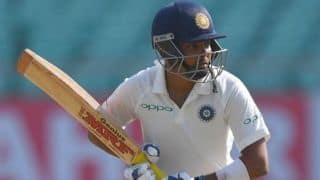