Chasing a target of 156, Akmal revived Quetta s run-chase after they were tottering at 34/2

Pakistan international Umar Akmal slammed a 50-ball 75 to lead Quetta Gladiators to a six-wicket win over Peshawar Zalmi in Match three of the Pakistan Super League 4 at the Dubai International Cricket Stadium on Friday.

Chasing a target of 156, Akmal revived Quetta s run-chase after they were tottering at 34/2, combining for a stand of 62 runs for the fourth wicket with skipper Sarfraz Ahmed (37 off 29 balls).

Quetta had the worst possible start to the chase losing Ahmed Shehzad for a first-ball duck to Hasan Ali, followed by the wicket of their foreign recruit Shane Watson for 19 to Umaid Asif.

Rilee Rossouw and Akmal then steadied the innings with a stand of 37 runs for the third wicket before Rossouw fell to Wahab Riaz for 19. During his knock, Akmal slammed seven fours and three sixes while Sarfraz helped himself to three fours and a six.

Riaz removed Sarfraz in the 17th over to claim his 50th PSL wicket, becoming the first player in the short history of the tournament to achieve the landmark. Dwayne Smith (11*) and Akmal then took their team home with two balls remaining.

Earlier, after being put in to bat, Peshawar were restricted to 155/4 despite Kamran Akmal and Misbah ul Haq s 49-run knocks. 23-year-old pacer Mohammad Irfan drew the first blood removing West Indian Andre Fletcher for one in the third over, before the senior Akmal and Shoaib Maqsood got together for a stand of 64 runs for the second wicket. The partnership was broken in the 11th over when Mohammad Nawaz removed Akmal.

Two overs later, left-arm pacer Ghulam Mudassar accounted for Maqsood, while Kieron Pollard could only add three runs in six balls before falling to Nawaz. Misbah found support in Liam Dawson (21*) as the duo pushed Peshawar’s total past the 150-run mark, which was eventually overhauled by Quetta. 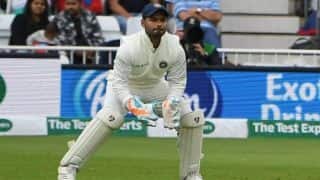 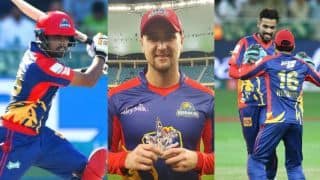