Himachal were 216/8 at the Kotla in response to Delhi's 317, thanks to a rearguard from Rishi Dhawan and Ekant Sen.

In their first their Elite Group B match of the 2018-19 Ranji Trophy, Gautam Gambhir s Delhi remain on top of Himachal Pradesh at the Feroz Shah Kotla.

The home team were bowled out for 317 from an overnight 305/8, with Pankaj Jaiswal taking the required two wickets, and then moved into the ascendency by keeping Himachal to 216/8 at stumps on Tuesday.

It would have been far worse for Himachal if not for a stabilising stand of 95 between Rishi Dhawan (64) and Ekant Sen (46) after Varun Sood and Vikas Mishra triggered a collapse from 50/2 to 58/6 in the span of roughly seven overs. Mishra s extraction of Ankush Bains for 22 was followed by Sood getting rid of Nikhil Gangta and Sumeet Verma for ducks and then Akash Vashisht for 1.

A crisis was averted by one-time India allrounder Dhawan and Sen, in his second first-class match. Sood later dismissed Dhawan for his fourth wicket, before Mayank Dagar (21*) and Jaiswal (23*) steered Himachal to the close of play. Jaiswal hit two sixes and a four in his 17-ball innings. 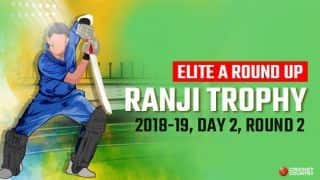