Gujarat found their second centurion in Dhruv Raval, who notched his maiden first-class century, as the home side declared their first innings against Chhattisgarh at a massive 538/7 on day two of the Elite A Round 2 match of the Ranji Trophy 2018-19 season at the Sardar Patel Stadium in Valsad on Tuesday.

In reply, Chhattisgarh were tottering at 53/2 with both openers Sahil Gupta (11) and Rishabh Tiwari (9) back in the hut.

Resuming their innings at 260/3, Manprit Juneja added five to his overnight score and departed after he was caught by Shivendra Singh off Vishal Singh. Rujul Bhatt fell two short of his eighth first-class fifty while Roosh Kalaria added five.

Raval, the 30-year-old wicketkeeper-batsman combined with India legspinner Piyush Chawla as the duo added 119 runs for the seventh wicket. Chawla was cleaned up by Vishal after a brisk 61-ball 59, which was helped with five boundaries and two sixes.

Gujarat declared their first dig with Raval unbeaten on 116, his innings decorated with 13 boundaries and a six, and the other batsman Chintan Gaja, who brought up his maiden first-class half century, batting on 59. 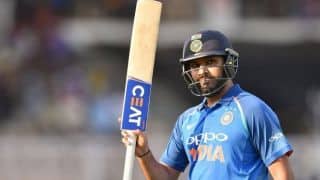