A superb all-round show from Jalaj Saxena took Kerala closer to victory against Andhra on Day 3 of their Round 2, Ranji Trophy 2018-19 Elite Group B clash in Trivandrum.

A superb all-round show from Jalaj Saxena put Kerala in a strong position against Andhra on Day 3 of their Round 2, Ranji Trophy 2018-19 Elite Group B clash in Trivandrum. After his 133 helped Kerala to 74-run lead as they were bowled out for 328, Saxena ran through Andhra innings to claim 7/44. At stumps on Wednesday, Andhra were 102/8, with a slim lead of 28 runs in their second innings.

The visitors began their innings cautiously after conceding firs-innings lead. Then Saxena took over as he triggered a slide from which they never recovered. Then openers had added 21 runs and both fell to Saxena in successive overs. KC Akshay then removed Andhra captain Bodapati Sumanth for a six-ball duck before Saxena razed through the middle-order ending the day with outstanding figures of 7/44 from 19 overs.

At the close of play, Ricky Bhui, who scored a century in the first innings, was unbeaten on 30 off 47 while Bandaru Ayyappa was yet to get off the mark. This was after the pair of Manish Golamaru and Shoaib Khan took three wickets each to ensure Andhra didn’t run away with a big lead. Saxena was the first to depart after adding six runs to his overnight total. Others got start but failed to build on them. They lost their last eight wickets for the addition of just 87 runs. 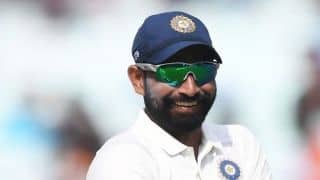