Jalaj Saxena, who scored a century in the first innings, finished with career-best figures of 4 for 45 to bowl Andhra out for 115.

In Group B, Kerala beat Andhra by nine wickets on the final day of Round 2 of the 2018-19 Ranji Trophy and registered their first win of the season. Jalaj Saxena, who scored a century in the first innings, finished with career-best figures of 4 for 45 to bowl Andhra out for 115 in the second innings. Requiring just 42 runs to win, Kerala got there but lost a wicket which prevented them from getting a bonus point. Fittingly, it was Saxena who scored the winning runs and was awarded the Man of the Match for his outstanding performance.

Earlier, Saxena put Kerala in a strong position on Day 3. After his 133 helped Kerala to 74-run lead as they were bowled out for 328, Saxena ran through Andhra innings to claim 7/44. At stumps on Wednesday, Andhra were 102/8, with a slim lead of 28 runs in their second innings.

Saxena triggered a slide from which Andhra never recovered. Then openers had added 21 runs before both fell to Saxena in successive overs. KC Akshay then removed Andhra captain Bodapati Sumanth for a six-ball duck before Saxena razed through the middle-order.

Overnight unbeaten batsmen Ricky Bhui and Bandaru Ayyappa resumed the proceedings on the final day but Andhra needed a total of just six overs to bring the innings to a close. Opener Arun Karthik was dismissed for 16 before Saxena and Rohan Prem knocked off the target. 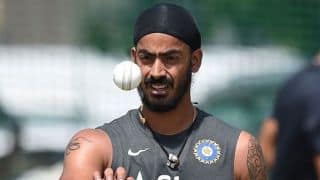