Punjab recovered from early blows to be placed at a solid 253/4 on Day 1 of their Ranji Trophy 2018-19, Elite B, Round 3 match against Madhya Pradesh when bad light stopped play. At the heart of Punjab’s recovery was opener Jiwanjot Singh’s unbeaten century and Gurkeerat Singh’s brisk half-century.

At the close of play on Tuesday at the Holkar Cricket Stadium, Jiwanjot had reached 122 of 123 off 212 and had Abhishek Sharma (22 not out) for company.

The decision to bat first came to bite Punjab early on when Kuldeep Singh and Avesh Khan reduced them to 20/2 inside eight overs. Sanvir Singh edged one from Kuldeep to be out caught-behind for 1 while Anmolpreet Singh (2) also fell in a similar fashion, to Avesh.

Jiwanjot found stitched two important partnerships to rescue Punjab from the twin-strikes. He first added 83 runs with captain Mandeep Singh (30 off 105) for the third wicket taking the score past the 100-run mark.

However, just when it looked the visitors had settled in, Ishwar Pandey removed Mandeep, out caught-behind in the 43rd over.

But the recovery continued as Jiwanjot went on to score his century, 10th of first-class career, hitting 15 fours so far. That he was able to bat patiently was thanks to an enterprising Gurkeerat who struck six fours and three sixes during his 80-ball stay before becoming Kuldeep’s second victim of the day.

Kuldeep (2/44), Avesh (1/58) and Ishwar (1/74) were among the wickets while Mihir Hirwani and Saransh Jain remained wicketkless. 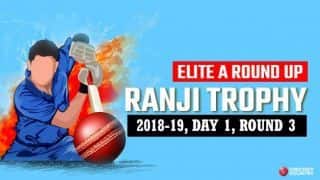 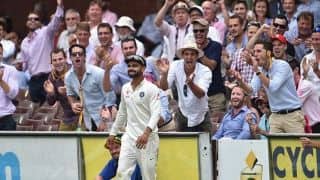