Vidarbha progressed to 243 for 6 against Railways on the opening day of their Round 6 fixture of the 2018-19 Ranji Trophy.

Vidarbha progressed to 243 for 6 against Railways on the opening day of their Round 6 fixture of the 2018-19 Ranji Trophy against Railways on Friday. Vidarbha skipper Faiz Fazal scored a half-century and was aided by a couple of vital contributions in the middle order from Akshay Wadkar and Mohit Kale.

Railways’ impressive showing was once again led by Avinash Yadav, who picked up 3 for 69. Winning the toss and opting to bat, Vidarbha lost opener Sanjay Ramaswamy for 12 with just 36 runs on the board. Fazal and Wasim Jaffer came together for a 46-run partnership for the second wicket before the promising-looking stand was broken by Madhur Khatri, who removed Jaffer for the first of his two wickets.

Avinash Yadav was then introduced into the attack and he fetched an early breakthrough with Ganesh Satish, followed by the big scalp of Fazal. At 104 for 4, Vidarbha were lifted by a 95-run partnership between Kale and Wadkar. Both batted with patience to lead a brief recovery for Vidarbha but both batsmen were unlucky to miss out on a half-century. Wadkar was cleaned up by Avinash for 48 and Kale was run out by Arindam Ghosh four short of his fifty. 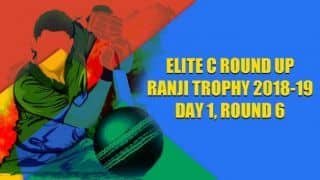