Ten wickets were shared by five Karnataka bowlers – all five bowlers picking up two wickets each – to help topple Gujarat for 216 in their first innings.

Ten wickets were shared by five Karnataka bowlers – all five bowlers picking up two wickets each – to help topple Gujarat for 216 in their first innings. Then, in reply, were 45 for the loss of two wickets, trailing by 171 runs.

In Round 6 Group A match of the 2018-19 Ranji Trophy in Surat, Gujarat won the toss and opted to bat first, but barring their captain Priyank Panchal, no other batsman could quite step up.  Panchal struck a half-century and top-scored with 74 as wickets around him tumbled. It was mostly due to a couple of vital contributions in the lower order from Piyush Chawla and Mehul Patel that Gujarat were able to breach the 200-run mark. Panchal batted for 135 deliveries and hit boundaries during his knock.

For Karnataka, captain Vinay Kumar, Prateek Jain, Ronit More, Krishnappa Gowtham and Shreyas Gopal were the wicket takers. But while batting, they were dealt a big blow when openers Mayank Agarwal was the first wicket to fall to Arzan Nagaswalla for 25 with 38 runs on the board. Chawla then cleaned up his opening partner Dega Nischal in the last over of the day. 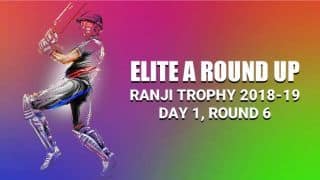 Ranji Trophy 2018-19, Elite Group A: Top order fires Saurashtra to 269 for 3 against Maharashtra