A captain’s knock from Jaydev Shah was the catalyst behind Saurashtra scoring 288 for 9 against Karnataka.

A captain’s knock from Jaydev Shah was the catalyst behind Saurashtra scoring 288 for 9 against Karnataka, who were buoyed by a five-wicket haul from Jagadeesha Suchith. The left-arm spinner’s 5 for 104 ensured that Karnataka kept making constant inroads, along with Pavan Deshpande who contributed with 3 for 78.

Shah missed out on a century by three runs, but he had done enough for Saurashtra to ensure them a safe total, if not a formidable one. Winning the toss and opting to bat, Saurashtra were off to a steady start with openers Hardik Desai and Snell Patel, before Suchith Suchith struck twice to remove wicketkeeper batsman Patel and Avi Barot for a nine-ball duck.

Desai hung around and partnered Arpit Vasavada before the opener became Suchith’s third victim. Sheldon Jackson endured a failure when he was dismissed for 4, when Shah and Vasavada added 40 runs for the fifth wicket. With Vasavada backfor 38, Shah stitched crucial 73 runs with Prerak Mankad. Mankad looked confident during her 57-ball 37 with seven boundaries before becoming Suchith’s fifth wicket.

Shah continued to resist with the tail and received able support from Kamlesh Makwana. Together, they took the total to 250 before Saurashtra were dealt the big blow of Shah’s dismissal for 97. 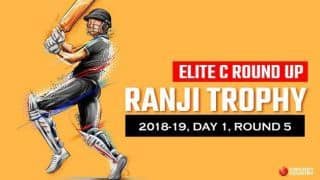