Mumbai s critical mix of seniority and youth was to the fore on a smoggy Delhi day at the Karnail Singh Stadium, where half-centuries to Suryakumar Yadav (83) and Siddhesh Lad (80*) revived the innings after Railways seamer Anureet Singh posed some problems. Jay Bista was given another shot at the opening slot and cracked 47 off 54 balls before he became Anureet s second wicket, but a stand worth 129 between Yadav and Lad put Mumbai back on track. Lad, batting at times with a pollution mask owing to the severity of the air in Delhi, once again came to Mumbai s call. With him at stumps was the allrounder Shivam Dubey on 35 from 42 balls, an innings that underlines former Mumbai skipper Aditya Tare s assessment that the youngster can be the replacement for Abhishek Nayar.

Defending champions Vidarbha endured a decent day against Maharashtra in Pune, one that looked significantly better with the wicket of Rohit Motwani just before stumps. Maharashtra ended on 284/6 with Chirag Khurana missing a century by 11 runs and three batsmen dismissed in the forties. Aditya Sarwate and Akshay Wakhare claimed two wickets each.

The left-arm spin of 18-year-old Siddharth Desai troubled Baroda at the Motibagh Stadium, to the tune of 5/109 as the home team were kept to 290 on day one by Gujarat. Yusuf Pathan (69) and Deepak Hooda (63) were the only batsmen to manage fifties as Desai and Piyush Chawla shared eight wickets. By stumps, Gujarat were 15 without loss.

Saurashtra will eye a big total after closing out the day on 282/3 against Chhattisgarh at Rajkot. Harvik Desai struck his maiden first-class fifty (78) and Snell Patel made 91, the pair s 149-run opening stand setting the stage for Saurashtra to dominate. That Cheteshwar Pujara (30) failed to cash in at his favourite venue would be disappointing, but Saurashtra have Sheldon Jackson on 49 and batting to come. 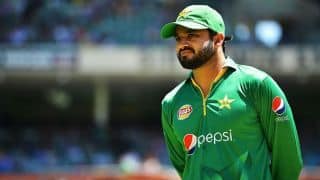 Khaleel and Rayudu big gains from the series: Virat Kohli