Three early blows left Madhya Pradesh struggling to save the match before Aryaman Birla and Shudham Sharma hit timely centuries to ensure a draw against Bengal in their second fixture of the 2018-19 Ranji Trophy Elite Group B, Round 2 on Thursday.

MP were asked to follow-on after being bowled out for 335 in their first innings on Day 4 at Eden Gardens. Anustup Majumdar struck in successive overs with the scalps of Rajat Patidar (14) and MP captain Naman Ojha (2) to raise Bengal’s hopes of a win. However, Birla, playing in his third first-class match, scored a maiden century, remaining unbeaten on 103 while Shubham Sharma hit 100* to take their team to 240/3 in 68.2 overs.

Their unbroken partnership of 171 runs for the fourth wicket ensured MP returned with a solitary point. Bengal, meanwhile, claimed three points on the basis of their first innings lead.

Earlier in the morning, Bengal pacer Ashok Dinda got rid of the unbeaten pair of Ankit Sharma (13) and Yash Dubey (38). MP tailenders managed to push them to 335 before being bowled out in 105.5 overs, to concede a lead of 175 runs.

They were asked to follow-on and their openers added 12 runs in 11.5 overs before Aamir Gani brok through the resistance of Ankit Dane (11). Majumdar’s double-strike then left them wobbling at 69/3 before Birla and Shubham dug in to rescue them. 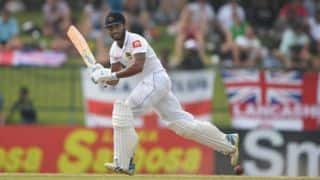