A round-up of the Elite Group B matches on day three of the 2018-19 Ranji Trophy.

Andhra Pradesh were solid in their reply to Punjab s 414 and reached 327 for 5 at stumps on Day 3 at the Visakhapatnam. Ricky Bhui struck his fifth First-Class century and along with half-centuries from Srikar Bharat and Bodapati Sumanth narrowed down the difference to 87. After Andhra has lost their first three wickets for 39, Bhui and Bharat came together for a crucial 151-run partnership for the fourth wicket.

Once legspinner Mayank Markande broke the stand Bhui added 132 more with Sumanth to take Andhra beyond the 300-mark margin. Punjab had to endure a long day during which just two wickets fell, both of which belonged to Markande.

At the Atal Bihari Vajpayee Stadium in Nadaun, bad light and rain stopped play on numerous occasion but despite the stoppages, Bengal were able to bowl 64 overs in the day. Himachal Pradesh progressed from their overnight score of 124 for 3 but six wickets in the day meant that they were positioned at 302 for 9 at stumps on Day 3. Ankush Bains could add only seven more runs to his overnight score before he was cleaned up by Aamir Gani. Sumeet Verma and Ekant Sen chipped in with 46 and 43 after which Rishi Dhawan remained not out on 24. For Bengal, Pradipta Pramanik took 4 for 54.

Marred by constant rain, only 20 overs of play was possible at the St Xavier s College Ground in Thiruvananthapuram in which Hyderabad scored 30 runs and lost a wicket, trailing Kerala by 465 runs. Resuming the day at 1/0, the first and second sessions were washed out. In the third session, Sandeep Warrier removed opener Akshath Reddy for 7. His partner Tanmay Agarwal was unbeaten on 24 with four boundaries. 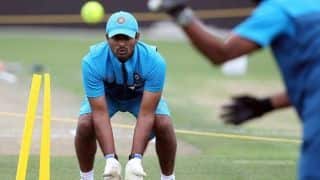