Odisha had a fine outing against Jammu and Kashmir, first bowling them out for a modest 127, and being solid in reply at 91/1, trailing by 36 runs.

Odisha had a fine outing against Jammu and Kashmir in their Group C, Round 7 tie of the 2018-19 Ranji Trophy on Saturday, first bowling them out for a modest 127, and being solid in reply at 91/1, trailing by 36 runs.

New-ball bowlers Basant Mohanty and Suryakant Pradhan shared seven wickets to rattle J&K s batting line-up. The destruction caused by Mohanty (3 for 24) and Pradhan (4 for 27) could be estimated by the fact that the home team was 7 for 4 after opting to bat first. Mohanty and Pradhan ripped through the top order with only Owais Shah. The only other double-digit scores in the innings were from Irfan Pathan (10), and a crucial 27 from Akash Choudhary, without whom J&K would have struggled to go past 100. Dhiraj Singh chipped in with 2 for 9 from nine overs.

Odisha however, would experience no such wobble in batting. Opener Anurag Sarangi led the way with an unbeaten 56 and recovered Odisha from 16 for 1 when Shantanu Mishra was cleaned up Irfan Pathan. Sarangi and Debasish Samantray added 75 unbeaten runs for the second wicket and extended J&K s search for a breakthrough. 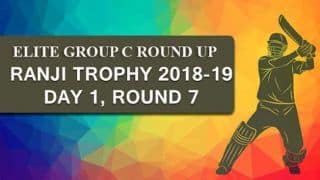