Uttar Pradesh jumped to the top of Elite Group C table with a clinical 10-wicket win over Odisha.

Uttar Pradesh jumped to the top of Elite Group C table with a clinical 10-wicket win over Odisha on the final day of Round 2 of Ranji Trophy 2018-19. Odisha, resuming on 180 for 7, were bowled out for 221 with fast bowler Shivam Mavi bagging his maiden five-wicket haul in First-Class cricket. Mavi and Ankit Rajpoot shared nine wickets to set their team a target of 44 runs, which Uttar Pradesh chased down without losing a wicket.

Earlier, UP put themselves in a commanding position after scoring 437 runs in their first innings courtesy 159 from skipper Askh Deep Nath s 159 and Rinku Singh s 72. Starting the day at 361/6, already leading by 105 runs, UP could only add a further 76 runs for the last four wickets, as Odisha pacer Basant Mohanty picked three wickets on day three.

Still, Mavi s 34 and Yash Dayal s 25 ensured that UP ended with a big total on the board. Mohanty returned 6/62 in the innings.

In reply, Anurag Sarangi was scalped by paceman Rajpoot for 9 before Sandeep Pattanaik and Govind Poddar added 43 runs for the second wicket. Pattanaik fell to Mavi for 46 while Poddar fell shortly afterwards for 27 to Mavi. Subhransu Senapati then added 42 before falling to Dayal. Rajpoot then got rid of Odisha skipper Biplab Samantray for 8. Rajpoot and Mavi then added two more scalps to their name to finish with three wickets each at stumps on Day 3.

Mavi and Rajpoot made short work of Odisha on Day 4. Mavi removed Rajesh Mohanty and Shantanu Mishra, after which Rajput picked up his fourth to bring down curtains on Odisha s innings. Then, it took UP openers Madhav Kaushik and Mohammad Saif one ball short of 13 overs to ensure UP a bonus point. 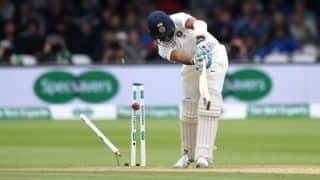