A round-up of the Elite Group C matches on day three of the 2018-19 Ranji Trophy.

Uttar Pradesh brought themselves within striking distance of wrapping up a comprehensive win against Goa at Kanpur s Green Park Stadium. Resuming the day on 473 for 3, UP scored 91 runs in 22 overs to eventually declared the innings on a massive 564 for 4. Akshdeep Nath missed out on his double-century by six wickets and Priyam Garg scored a third century of the innings to set Goa a target of 412.

In reply, Goa were restricted to 123 for 8 with Ankit Rajpoot (3 for 23) and Saurabh Kumar (4 for 31) doing the bulk of the damage. Goa s scorecard represented a sorry reading with Sagun Kamat, Amogh Desai and Snehal Kauthankar entering 20s.

Medium-pacer Ashish Kumar picked up a five-wicket haul as Jharkhand bowled out Assam for 298 in the first innings at the JSCA International Stadium in Ranchi. Sibsankar Roy, Gokul Sharma and Amit Sinha scored half-centuries, but they eventually failed to even go past the 300-run mark. Sharma missed out his century by eight runs while the other two also failed to cash in on good starts. Eventually they conceded a first-innings lead of 46 runs.

Jharkhand suffered a blow first ball of the innings when Arup Das removed Anand Singh. But they recovered to move to 44 for 1 with Nazim Siddiqui and captain Ishan Kishan ensuring there weren t further bumps.

Himanshu Rana struck a career-best 164 and along with crucial half-centuries from Pramod Chandila and Harshal Patel at No. 8 posted 442 before getting dismissed against Odisha at the KIIT Stadium in Bhubaneswar. Debabrata Pradhan finished with 3 for 96 while Suryakant Pradhan and Rakesh Mohanty scalped two each. In reply, Odisha in their second innings progressed to 50 for 1, behind Haryana by 68 runs at stumps on Day 3. Jayant Yadav struck in the eighth over to remove opener Sandeep Pattnaik for 6, but first-innings centurion Anurag Sarangi and Govinda Poddar batted till time.

Rajasthan have set Jammu and Kashmir a huge 395-run target to get, 34 of which they have scored by stumps at the Sawai Mansingh Stadium in Jaipur. Resuming the day at 186 for 7, Rajasthan bowlers made short work of J&K innings to bowl them out for 204. Rahul Chahar finished with 5 for 59.

Then, Rajasthan scored 219 in 63 runs for the loss of four wickets with opener Amitkumar Gautam scoring a half-century. He was supported by Robin Bist and Tejinder Singh who contributed with 44 and 49* respectively to set J&K a mammoth target to chase.

Tripura strengthened their position against Services to attain a lead of 232 runs against Services at the Maharaja Bir Bikram College Stadium in Agartala. The first period of the day belonged to fast bowler Manisankar Murasingh who produced career-best figures of 7 for 53 to bowl Services out for 238 in their first innings. Murasingh added three more to his overnight tally and despite a half-century from Vikas Hathwada, Services couldn t get much.

Then in the second period of the day, Tripura openers Bishal Ghosh and Udiyan Bose batted carefully to take the team to 110 for 0, with Bose scoring a half-century. 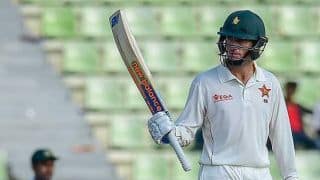