Piyush Chawla’s century, aided by a half-century from captain Priyank Panchal powered Gujarat to 340 for 8 against Railways.

Piyush Chawla’s century, aided by a half-century from captain Priyank Panchal powered Gujarat to 340 for 8 against Railways on the opening day of a Group A fixture of the 2018-19 Ranji Trophy at the Sardar Vallabhai Patel Stadium in Valsad on Thursday. Medium pacer Amit Mishra took 4 for 78 while Anureet Singh and Avinash Thakur picked up two wickets each.

Railways opted to bowl after winning the toss and struck immediately with Anureet sending one down that breached the defence of opener Kathan Patel and uprooted the off and leg stump. Mishra struck twice in two overs to remove Bhargav Merai and Manpreet Juneja to restrict Baroda to 27 for 3. But to rebuild the innings, Panchal and Rujul Bhatt came to the fore with a 56-run stand. Panchal added 42 more with Druv Rawal before Railways came back. Mishra and Avinash removed Panchal and Rawal, followed by the wicket of Roosh Kalaria for 46 to leave Gujarat worrying at 209 for 7.

Help arrived from Chawla, who registered his sixth F-C Century. He added 99 runs with Chintan Gaja before the latter was removed by Avinash for this second wicket. Arzan Nagaswalla then supported Chawla till stumps, by which Gujarat had strengthened their position admirably. 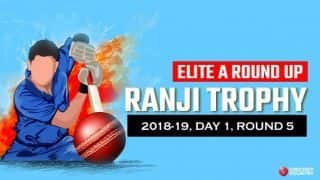 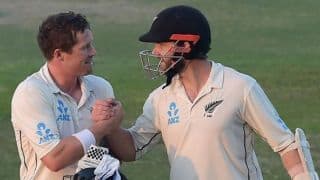