Tamil Nadu registered their first win of the season, beating Kerala by 151 runs on Sunday in a Ranji Trophy Elite Group B match.

Tamil Nadu registered their first win of the season, beating Kerala by 151 runs on Sunday in a Ranji Trophy Elite Group B match at the M A Chidambaram stadium.

The victory and six points renewed Tamil Nadu’s hopes after the team had logged only five points from four matches prior to the Kerala game. They are now at fifth place in the standings with 11 points. Kerala are second in the group on 13 points behind Madhya Pradesh (18).

Needing 369 to win their third match, Kerala were bowled out for 217 despite half-centuries from Sanju Samson (91) and Sijomon Joseph (55). The two added 93 runs for the third wicket to defy the Tamil Nadu bowlers, who were on the lookout for breakthroughs.

Resuming at 27 for 1 this morning, Kerala lost K B Arun Karthick for 33 to a catch by N Jagadeesan off Sai Kishore’s bowling. The partnership between Samson and Sijomon Joseph, who showed great resolve, raised Kerala’s hopes of pulling off a draw.

Left-arm medium-pacer T Natarajan, who was the star for the home side in the second innings picking up five wickets, broke through by getting Joseph leg-before. None of the other batsmen showed any resistance as Natarajan triggered the collapse and sealed an important and much-needed win for Tamil Nadu. 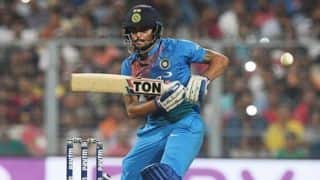 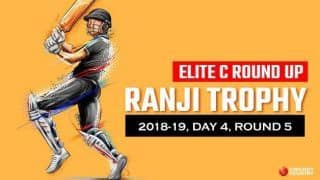