Goa took home three points after their Ranji Trophy 2018-19 Trophy Elite Group C fixture against Services ended in a draw at the Goa Cricket Association Academy Ground in Porvorim on Sunday. Services, whose overnight score read 277 for 5, lost their final five wickets for 55 runs to be all out for 332. In reply, Goa were 67 for 2 at the tea interval before both teams mutually decided to call off the game early.

Gahlaut Rahul Singh, who was unbeaten on 84 the previous day, completed his century but lack of contribution from Services lower order meant that what could have been an even stronger second innings total was limited to inside 350. Amit Verma completed his five-wicket haul to finish with 5 for 39 while Lakshay Garg and Vijesh Prabhudesai took two wickets each.

Goa, chasing 257 to win, were dealt a blow early into their innings. With 25 runs on the board, Akash Sharma removed opener Amogh Desai and skipper Sagun Kamat in the 13th over, but Amit Verma and Sumiran Amonkar faced over 150 and 120 deliveries respectively to prevent any further bumps. 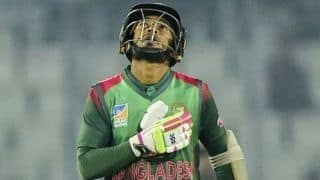