Rajasthan recorded their fourth win of the 2018-19 Ranji Trophy when they defeated Assam by an innings and 43 runs on Saturday.

Rajasthan recorded their fourth win of the 2018-19 Ranji Trophy when they defeated Assam by an innings and 43 runs on Saturday. Assam, resuming the day on 104 for 3 were bowled out for 174, handing Rajasthan a bonus point with fast bowler Aniket Choudhary picking up his eighth five-wicket haul in First-Class cricket.

For Assam, Gokul Sharma and wicketkeeper batsman Kunal Saikia showing resistance. The two batsmen added 96 runs for the fourth wicket with Sharma striking a half-century. Nathu Singh snapped the flourishing partnership to give Rajasthan their first breakthrough of the day trapping Assam’s top scorer Sharma for 77.

Choudhary, who had removed opener Rishav Das on Friday removed dismissed Saikia for his second wicket, falling one short of a half-century as substitute Manender Singh completed a successful catch – he took two more catches in the innings. Assam lost their last seven wickets for just 33 runs with Choudhary picking up the wickets of Arup Das, Ranjit Mali and Mukhtar Hussain to clean up the tail. 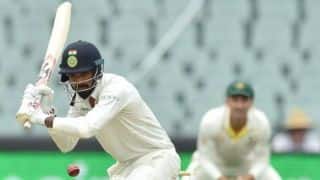 I don’t like seeing it at all: Ricky Ponting on Adelaide crowd booing Virat Kohli