In their debut Ranji Trophy match in round two of the Ranji Trophy 2018-19, Puducherry posted 389 in their first innings before reducing Meghalaya to 161/6

In their debut Ranji Trophy match in round two of the Ranji Trophy 2018-19, Puducherry posted 389 in their first innings before reducing Meghalaya to 161/6 at close of play on day two at the CAP Siechem Ground, Puducherry.

Starting the day at 269/7, skipper Rohit, batting on 61, completed his maiden century and went on to add 138 runs off 321 balls to lead Puducherry to a big total. No.10 batsman Vengat ably supported his skipper, scoring 26 off 77 balls. For Meghalaya, Gurinder Singh claimed 4/106.

Earlier on day one, Paras Dogra had made 101 while Veteran Abhishek Nayar had added 57.

In other Plate group match, Manipur fought back after Uttarakhand s early dominance

In reply, Meghalaya openers – RR Biswa (31) and skipper JJ Lamare (16) – put on 48 runs for the first wicket, before Akshay Jain trapped Biswa in front, followed by the wicket of Sylvester Mylliempdah for a duck by Jain. Lamare departed in the next over to Fabid Ahmed.

But, Punit Bisht and Yogesh Nagar then got together for a stand of 97 runs for the fourth wicket to steady Meghalaya. Former Rajasthan pacer Pankaj Singh then claimed three quick wickets late in the day to leave Meghalaya in a spot of bother at 161/6. 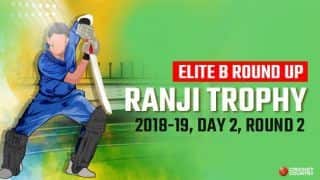