Sikkim claimed their second straight victory in the Ranji Trophy 2018-19 season, beating Nagaland by nine wickets on day three of round two of the tournament at Nagaland Cricket Stadium, Sovima on Wednesday.

Sikkim once again rode on the terrific performances on their outstation players, especially Milind Kumar who notched up his second successive double ton.

After bowling out Nagaland for 179 on day one with Ishwar Chaudhary claiming 4/65, Bipul Sharma returning 3/46 and Milind adding 2/21, Sikkim made 374 in their first innings courtesy Milind s 224 and Bipul s 90.

In reply, Nagaland were reeling at 97/5 at stumps on day two. But, KB Pawan s 134 and Imliwati s 61 meant Nagaland managed to take the lead as they finished at 273.

Nagaland set Sikkim a target of 79 runs which they overhauled in 25.4 overs and with nine wickets in hand. Skipper Nilesh Lamichaney remained unbeaten on 33 alongside Ashish Thapa on 27*. 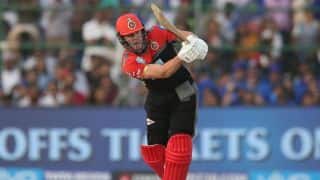 Will look to exploit the bounce on the wicket in Australia: Yuzvendra Chahal