In the battle of the table-toppers in Plate group, Sikkim enjoyed the upper hand over Uttarkhand in the early going at the KIIT Cricket Stadium, Bhubaneshwar on day one of the Round 3 of Ranji Trophy 2018-19 on Tuesday, by reducing Uttarakhand, playing their first away game, 38/4 before the experience of skipper Rajat Bhatia came the fore as he revived the team, scoring 121, helping Uttarakhand to 290/5 at stumps.ALSO READ: Yogesh Nagar s 166 leads Meghalaya to 338/5 against Nagaland

After being inserted to bat, Uttarkhand were rocked early with Sikkim s outstation player Ishwar Chaudhary getting rid of Uttarakhand opener Karanveer Kaushal for 4. Five overs later, outstation player Bipul Sharma accounted for experienced Vineet Saxena for 19, followed by the wickets of Karthik – run out by Lee Yong Lepcha for 8 – and Vaibhav for 5 – by Chaudhary – to leave Uttarkhand reeling. ALSO READ: After Taruwar Kohli s 100, Mizoram reduce Manipur to 54/3

Bhatia though combined with young Saurabh Rawat and the duo added 208 runs for the fifth wicket and batted out 57 overs in the day. Bhatia made 121 off 156 balls before becoming Chaudhary s third victim of the day. Rawat remained unbeaten on 115 off 246 balls with the help of seven fours and three sixes with wicketkeeper batsman Vaibhav Bhatt for company on 15 not out.

For Sikkim, Chaudhary finished day one with 3/81 while Bipul claimed 1/67. The three outstation players for Sikkim. Chaudhary, Bipul and Milind Kumar combined to bowl 64 overs out of the 90 on day one. 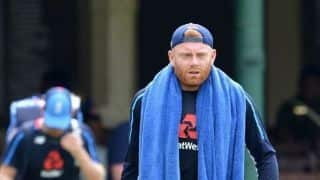