Manipur crashed to 125/8 in their second innings despite skipper Yashpal Singh s unbeaten 69 after conceding a lead of 115 runs to Meghalaya on day two of round four of 2018-19 Ranji Trophy season at JU Second Campus, Salt Lake, Kolkata on Thursday.

One day one, Meghalaya had bowled out Manipur for 211 before finishing the day at 82/1. Resuming day two, Meghalaya were buoyed by Raj Raju Biswa s 87 up the order. Skipper Jason Lamare made 23 before falling to Thokchom Singh. The duo added 71 runs for the second wicket.

Biswa was joined by Puneet Bisht who scored 92 off 88 and added 102 runs for the third wicket with Biswa, before the opener fell to Nungleppam Singh. Singh then removed Yogesh Nagar for 22 before removing Bisht six overs later. But Gurinder Singh took Meghalaya past 300 scoring 55 off 86. Meghalaya were all out for 326, taking a lead of 115 runs over Manipur.

In reply, Manipur imploded in their second dig. They lost openers Prafullomani Singh (4) and Lakhan Arjun Rawat (10) to Abhay Negi. Gurinder Singh removed Priyojit Singh for 10 followed by the wickets of Santosh Singh (0), Syed Mujibur Rahaman (5) by Gurinder. Aditya Singhania added the wicket of Bimol Singh for (4). Gurinder then completed his five-wicket haul with the wickets of Kabrambam Meitei (1) and Nungleppam Singh (0).

Skipper Yashpal waged a lone battle and remained unbeaten on 69 off 91 balls with 12 fours and a six and has Thokchom Singh (9*) for company as Manipur reached 125/8, leading Meghalaya by 10 runs 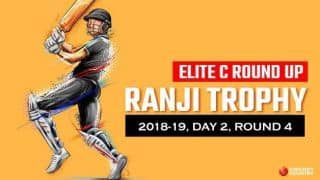