Services took three points from this match on the basis of securing a first-innings lead.

A gritty maiden first-class hundred from Debasish Samantray and a dour unbeaten 46 from Anurag Sarangi, pushed down the order after his usual role as opener, led Odisha to a draw against Services in their eighth-round 2018-19 Ranji Trophy fixture at Palam.

Services took three points from this match on the basis of securing a first-innings lead.

Debashish Samantray progressed from an overnight 34 to get 102 off 259 balls before he was fourth out at 211/. A fifth wicket fell in the form of skipper Biplab Samantray for 3 just 10 runs later, but Sarangi (46* from 144 balls) found assistance from Abhishek Raut (20* off 22) to take Odisha to a draw. Also having a hand in the escape was Govinda Poddar who made 23 from 101 balls.

Odisha s lead was 16 at the close of the game. 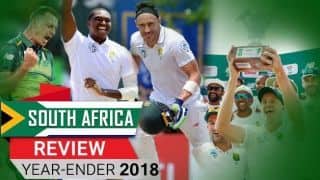