Bihar claimed their second win of Ranji Trophy 2018-19 with an innings and 317 runs win over Arunachal Pradesh on day three of round four of the tournament on Friday at Moin-ul-Haq Stadium, Patna.

Bihar posting a mammoth 536/5 declared in their first innings, after bundling out Arunachal for 84 on day two, to take a lead of 452 runs. Arunachal then made good progress in their second innings, finishing the day at 98/1.

However, on day three, Arunachal s batting capitulated as left-arm spinner Ashutosh Aman claimed 7/21, to go with his 4/26 in the first innings.

Akhilesh Sahani was the first to go on day three when he was taken by Aman for 25. Next to depart was opener Samarth Seth, who made 58, but fell to Aman, trapped in front. Arunachal found themselves 110/3, trailing by 342 but they lost their last seven wickets for just 25 runs to be bowled out for 135, thus conceding the match by an innings and 317 runs.

For Bihar, the star performer proved to be Indrajit Kumar, who scored 222 off 266 balls and Ashutosh Aman who claimed his second 10-wicket haul in as many games.

This win takes Bihar to third in the points tally in Plate group with 14 points, while Arunachal slumped eighth with three points from four games. 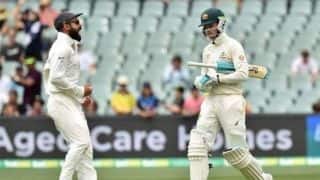 India in the driver’s seat and all set to take the game away: Sachin Tendulkar 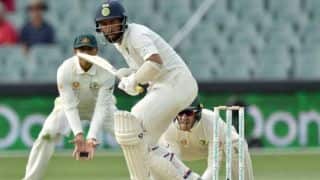