Harris was dropped twice on opening day, which saw Victoria reach 266/6 against NSW.

Marcus Harris marked day one of the 2018-19 Sheffield Shield final by hitting 141, his third century in a row in the prestigious tournament’s summit clash, to help Victoria to 266/6 at the close of play against New South Wales at Melbourne’s Junction Oval.

Dropped twice on Thursday, the left-hander faced 229 balls for his 141, which featured 17 fours. This makes it three hundreds for Harris in Sheffield Shield finals.

No other Victorian managed a fifty, with Matthew Short’s 34 the next best score. New South Wales put down four catches in all, which could prove pivotal in the outcome of this match. (READ: Marcus Harris ‘trying everything right’ to seal Ashes spot)

Harris, who since the Shield season resumed after the Big Bash League break, went into the final with scores of 95, 174, 94, 44, 6, 29, 16 and 65. On the day, he called on his powers of concentration to hit his third century of the season. His 141 followed the hundreds he made for Western Australia in the 2015 Shield final and in 2017 for Victoria. (READ: Number 13: Sheffield Shield duck record equalled in seven-session rout)

Harris put on 63 for the second wicket with his skipper Travis Dean (23) and 80 for the fifth with Short. The left-hand opener – leading the Shield run table this season – was nearly out early on Thursday when Jack Edwards dived at cover but couldn’t reach the ball. The first actual drop came when Harris was 71 as Nick Larkin at third slip grassed an edge off Sean Abbott. On 121, Harris edged Edwards to first slip where Copeland put down the catch.

When he was dismissed, Harris’ run tally for the season stood at 1,165 which is the 15th most for any batsman in Shield history.

Also dropped on day one were Dean on 9 by Kurtis Patterson at gully and James Pattinson soon before stumps, by NSW wicketkeeper Peter Nevill off Copeland. At stumps, Pattinson was on 11 from 66 balls and Chris Tremain on 13 off 32.

NSW also had a slice of luck go their way when Seb Gotch (2) was given out caught behind off Copeland despite replays showing a the fast bowler had over-stepped. 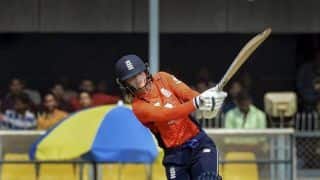