Peter Siddle and James Pattinson grabbed eight wickets between themselves to keep Victoria right on top of New South Wales on day two of the 2018-19 Sheffield Shield final at Melbourne’s Junction Oval, where at stumps the home team had a lead of 216 with nine wickets remaining.

Resuming on 266/6, Victoria were bowled out for 289 and then limited NSW to 121 in 39 overs, with Siddle claiming 5/28 and Pattinson 3/30. A day of dominance has left Victoria firm favourites for a fourth Sheffield Shield trophy in the past five seasons.

Pattinson helped his side battle to 289 with an unbeaten 23 off 96 balls, but it was with the ball in hand that he really gave NSW a tough time. His wickets included the skipper Peter Nevill for 4 and Jason Sangha for 21, around some splendid bowling from the veteran Siddle.

Siddle got stuck in early when he trapped Daniel Harris for 2 and later triggered a collapse with the wickets of Moises Henriques (35), Jack Edwards (20), Steve O’Keefe (1) and Trent Copeland (0). In this passage, NSW lost seven wickets for 33 runs in 11.4 overs.

Victoria were 48/1 at stumps, with skipper Travis Dean batting on 23. 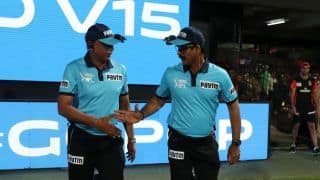