Defending a total of 160/6, in which the debutant Rassie van der Dussen made 56 off 44, South Africa bowled Zimbabwe out for 126.

For the second time in three matches, the legspin of Imran Tahir proved a problem for Zimbabwe’s batsmen to cope with. Having taken six wickets in the second ODI to seal that series, Tahir took 5/23 on Tuesday at Buffalo Park to help bowl South Africa to a 34-run win in the first Twenty20 international.

Defending a total of 160/6, in which the debutant Rassie van der Dussen made 56 off 44 balls to help the home team recover from a poor start, South Africa bowled Zimbabwe out for 126. Tahir led the demolition by taking the first three wickets with the new ball inside four overs. Zimbabwe were on the back foot at 11/3 and struggled to make partnerships.

In his second spell, Tahir took two wickets off successive balls to reduce Zimbabwe to 65/6. Peter Moor with 44 off 21 balls and Brandon Mavuta with 28 off 14 in an eighth-wicket stand of 53 off 19 balls, but never really threatened to chase 161.

Having opted to bat, South Africa earlier found themselves 11/2 in the second over with Chris Mpofu getting rid of the returning Quinton de Kock for 5 and Kyle Jarvis removing another debutant, Gihahn Cloete, for 5 Van der Dussen, 29, and David Miller (39) added 87 off 66 balls for the fourth wicket as South Africa struggled on a slow pitch against some good bowling.

Jarvis finished with 3/37 and Mpofu 2/24 as South Africa managed 36 runs in the last four overs for the loss of three wickets. Bavuta’s four overs of legspin cost just 19 runs and claimed the wicket of South African captain Faf du Plessis for 34 off 20 balls.

Tahir was Man of the Match for his 5/23 – his best figures in T20Is. “I ve been practising with the new ball to see if I can get more accurate (in case) I get a chance to bowl with it,” he said after the win.

“The bowlers continued their good work. They did brilliantly,” said Zimbabwe captain Hamilton Masakadza. “We haven’t had any sort of foundation.” 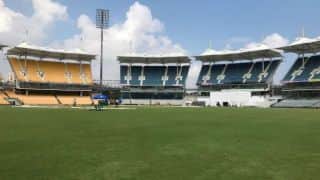 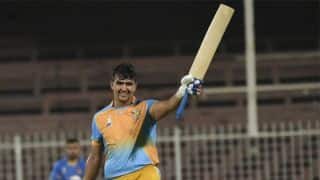