South Africa women started their India tour on a positive note as they defeated Board President’s XI by 83 runs in the second T20 warm-up match on Sunday. South Africa women, batting first, posted a decent 174/5 after opting to bat and later bundled out BPXI for 91 to kick off their campaign with a win.

Shabnim Ismail and skipper Sune Luus picked up three wickets each for South Africa women as she ran through the BPXI’s middle-order. Wicket-keeper Lizelle Lee stoked her way to 65 off just 48 balls for South Africa women and Tazmin Brits made 20 off 19 as they shared 61 runs for the opening stand to lay the foundation of the chase.

Lee was in her elements as he took on the opposition bowlers, hammering 10 fours and a six. BPXI bowlers then removed Brits and one-down Laura Wolvaardt (7) in quick succession, but that did not deter Lee from playing her natural game. For the visitors, a late onslaught by Mignon du Preez (40 off 18 balls) coupled with Nandine de Klerk’s 29 helped them go past the 170-run mark. Preez stuck six boundaries and cleared the fence once during her entertaining knock.

For the hosts, off-break bowler Tarannum Pathan grabbed two wickets conceding 23 runs, while fast bowler Mansi Joshi part of the main squad, returned forgettable figures of 0/37 from three overs. Chasing the target, BPXI were tottering at 4 for 6 after their first four batters walked back to the pavilion in no time.

Openers M D Thirushkamini (2), young prodigy Shefali Verma (0), Vanitha V R (4) and skipper Sushma Verma (0) had a forgettable outing as the South Africa women bowlers wreaked havoc inside the first two overs. From there on, BP XI were left to playing catch-up and eventually folded for 91.

Bharti Fulmani (23) and Joshi (20) got some runs but South Africa women picked up wickets at regular intervals to maintain their upper hand. Apart from the South African skipper, right-arm medium pacer Shabnim Ismail (3/11) and Ayabonga Khaka (2/7) also played a part in the win with their bowling efforts.

The five-match T20 series between South Africa women and India women begins here from September 24. It will be followed by three-match ODI series. 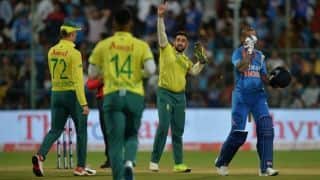