Chhattisgarh gunned down a stiff target of 211 to defeat Haryana by five wickets in a Round 4 match of the Syed Mushtaq Ali Trophy. Powering the chase were opener Rishabh Tiwari and Amandeep Khare, who scored half-centuries, aided by a 34-ball 49 from captain Harpreet Singh. Together, their efforts helped trump the lower order contributions from Haryana’s lower order which played a key role in lifting them to over 200. (READ: Chhattisgarh lose to Assam)

Haryana won the toss and opted to bat but found themselves reduced to 3/3 with Pankaj Rao and Shakeeb Ahmed inflicting early damage. Chaitanya Bishnoi forged an inspiring 75-run partnership with Sumit Kumar to bring Chhattisgarh back in the match and the pair did so in style. Bishnoi cracked six boundaries and two sixes while Kumar was the aggressor, scoring 43 off 29. (READ: Haryana lose to Bengal)

Shivendra Singh broke the alliance but there would be no respite for Chhattisgarh, whose bowlers came under the pump from Pramod Chandila and Rahul Tewatia. Tewatia hammered five fours and five sixes en route to an unbeaten 59 off 20 and with Bishnoi added 89 off just 33 balls.

Chhattisgarh were on the ball from the onset. Despite losing Shashank Chandraker for 13, Tiwari and Harpreet took the chase forward stitching a 74-run stand for the second wicket. Amit Mishra provided the breakthrough with the wicket of Harpreet, who fell one short of a half-century. But Khare and Tiwari ensured that Chhattisgarh did not lose steam, and together, collected 14 boundaries and five sixes.

Sumit Kumar dismissed both off consecutive balls – running Khare out of his own bowling and cleaning up Tiwari the ball after but Vishal Kushwaha scored 19 off 12, his calm nerves winning Chhattisgarh the match off the last ball of the match. 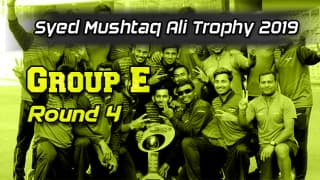