Ishan Kishan bounced back after recording a duck against Delhi with a blistering century while Rahul Shukla took a fifer.

Ishan Kishan bounced back after recording a duck against Delhi with a blistering century against Jammu and Kashmir as Jharkhand recorded a nine-wicket win in their second-round match of the Syed Mushtaq Ali Trophy 2019.

Kishan dominated the chase of 169 on Friday in Vijayawada, remaining unbeaten on 100 off 55 that saw him belting eight fours and seven sixes. Jharkhand overhauled the target in 16.4 overs, finishing on 170/1.

Jharkhand, who beat Delhi in a last-over thriller in round 1 on Thursday, won the toss and opted to field. Left-arm spinner Shahbaz Nadeem struck with the second delivery of the innings as he had Abdul Samad stumped for a two-ball duck.

J&K recovered through Jatin Wadhwan (47) and Shubham Khajuria (31) who added 79 runs for the second wicket. Rahul Shukla got rid of both the batsmen in an over Wadhwan holing out to Ishank Jaggi while Khajuria out hit wicket.

Manzoor Dar and Parvez Rasool steered the innings forward with J&K aiming for a big total. Irfan Pathan began his innings in blazing fashion, hitting three fours off the first four-ball faced but Shukla had him caught for 12 o trigger a collapse.

In reply, Jharkhand openers built a century partnership with Anand Singh missing out on a fifty by just two runs, falling to Umar Nazir in the 12th over. Virat Singh remained unbeaten on 12 with captain Kishan driving his side to a second-straight win. 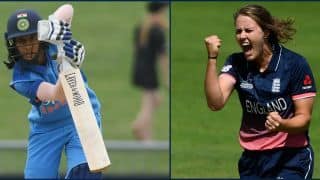