Kerala recovered from a poor start thanks to an all-round show from Vinoop Manoharan to thump Jammu and Kashmir by 94 runs.

Kerala recovered from a poor start thanks to an all-round show from Vinoop Manoharan to thump Jammu and Kashmir by 94 runs for their third win of the Syed Mushtaq Ali Trophy 2019 on Wednesday.

Having been reduced to 69/4 after being put in to bat in Vijayawada, Kerala were propped up middle-order pair of Manoharan (52) and Mohammed Azharuddeen (32) before Salman Nazir’s (23*) cameo took them to a decent 159/7 in 20 overs.

J&K started off cautiously but succumbed to a combined show from Kerala bowlers to be skittled for 65 in 14.2 overs.

Kerala lost openers Vishnu Vinod and Arun Karthik to run-outs while Rohan Prem became Ram Dayal’s only victim of the innings inside the Powerplay overs, struggling at 33/3. They had to thank Manoharan whose half-century scored with the help of five fours and two sixes that was vital in holding the innings together.

In the company of Azharuddeen, he added 45 runs for the fifth wicket. Following his dismissal in the 15th over, Azharuddeen took over to prevent the momentum from shifting, hitting 32 off 25.

In reply, only two J&K batsmen registered scores in double-digits with Jatin Wadhwan top-scoring with 24off 28. Sudhesh Midhun caused the maximum damage finishing with figures of 3/9 while Vinoop Manoharan and MD Nidheesh chipped in with a couple of wickets each. 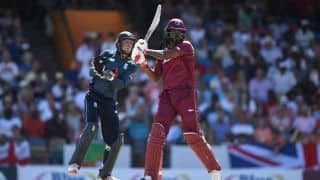